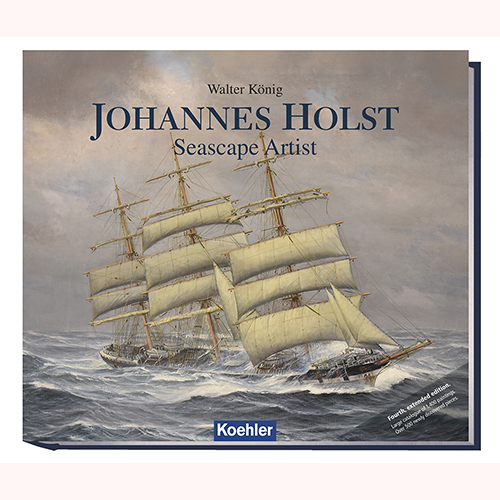 Book to the past special exibition. The book describes »the whole Holst«

The book describes »the whole Holst«, the gifted seascape artist, the passionate sailor and boat builder, the builder of violins and music aficionado, the family man. Here are displayed previously unknown paintings of his family, of Altenwerder fishermen in sou’westers smoking pipes, the old shoemaker from next door, Bismarck and Liz Taylor, seafarers’ brides and South Sea beauties. The author discovered 1,400 works by the artist over many years of research which makes this the most thoroughly documented work on a German seascape artist. Every painting is shown in a Catalogue of Work, almost all in colour, every one described with affection. Over 100 paintings are displayed in the centre of the book to allow the great age of the windjammer and tea clippers to be relived. Just as Gorch Fock from Finkenwerder became poet of the sea, so Johannes Holst from Altenwerder became painter of the sea – congenial representatives of a life predicated by Elbe island culture in front of Hamburg’s gates. A book worth reading – a humble artistic work about a huge artist!

If, when you look at a painting, you can “see” the wind and “feel” the swell of the sea, if ewers, yachts and clippers are rendered with such attention to detail that you could rig up a sailing ship based on them, you’re probably looking at a picture by Johannes Holst. His vivid, harmoniously composed pictures are without rival in German maritime art. They include world-famous paintings depicting windjammers off the coast of Cape Horn, gripping regatta scenes and cutters from the Elbe peninsula.

The genius of Altenwerder (1880–1965) left behind an impressive oeuvre that until now had only been incompletely documented. Over the course of seven decades, he produced over three thousand paintings with motifs from his homeland, the fishing industry on the Elbe and, especially, the great windjammer era. However, the precise number of paintings will remain a mystery, since he did not keep a list of his works.

Walter König, born like Holst in Altenwerder, was familiar with the painter, life as a fisherman on the Elbe and shipping from a young age. He has been studying the life and work of Johannes Holst for decades. For the fourth edition of his book Johannes Holst – Painter of the Sea, König has discovered and documented 470 new Holst paintings.

The fourth edition brings together 1,400 Holst paintings in a catalogue of his works. The pictures are accompanied by explanations and key facts. The informative yet entertaining text section describes Holst’s creative output and the ups and downs of his life, supplemented by seven guest contributions by expert authors. Never before has it been possible to come so close to the work and personality of Johannes Holst.

Walter König, born 1935, appears to have the maritime world of wind and waves in his blood. He is descended from fishermen, shipwrights and dockmasters who lived on the Elbe islands of Finkenwerder and Altenwerder. His grandfather, a true Cape Horner, sailed around Cape Horn in 1895 in a Laeisz ship and worked at Blohm+Voss on the building of the Peking, a historic vessel that will soon be returning to Hamburg.

König completed an apprenticeship at a Hamburg export company, which then sent him to Africa for four years. He spent most of his working life travelling across all five continents marketing surgical instruments. Today, he lives in Tuttlingen, near Lake Constance. This book is his masterpiece, packed with new discoveries about the fascinating world of seafaring and maritime painting.